Until Porsche turned 18, it made only one car, the 356. It came in various styles and colors and with a few different engines, but throughout Porsche’s adolescence, the 356 was it. By the early 1960s, Porsche’s old faithful began to lag behind the industry standard. It was high time for an upgrade, which is exactly what the German automaker supplied when it launched its first 911 in 1965.

Under the internal type number 901, the 911 was a completely new GT car that took the best bits of the 356 and made them better. The 911 has better visibility, more shoulder room and an overhead cam 2.0 liter flat six-cylinder motor with about 40 more horsepower than the 356 Super. Early 911s retained the vintage charm of a 356, including chrome trim inside and out, but also the same tendency to rust. Behind the wheel, the early 911s could be a little wild.

Their increased power rode on tiny 165-15 tires, giving them a propensity for fishtailing. But that doesn’t diminish the raw, unadulterated joy sparked by driving an early 911. If anything, driving this car is so fun precisely because it is slightly unhinged. And that is why early 911s in truly good conditions are so rare and so valuable. Put another way, any 1968 911S 2.0 in pristine condition, like this one here, must have had an owner with the most iron discipline known to man. Because that’s what it takes to stop oneself from driving this car like a maniac every time you get behind the wheel. 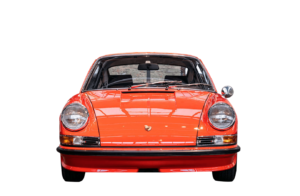 Again, by signing up you are making a non-binding reservation. You will not be charged unless you decide to finalize your investment during the initial offering.
£50 Per share
38% left
Reserve shares