The outstanding achievement of the 190SL is without a doubt its quality in design and workmanship. But a close second is the general feeling of solidity which it immediately conveys.
Road and Track

The 1956 Mercedes-Benz 190SL’s story begins with its predecessor, the famed 1954 Mercedes-Benz 300SL. This car was as close to technical perfection as you could get in the 50s. Its engine was one of the pioneers of fuel injection, and its tubular frame spoke to the burgeoning science of incorporating aerodynamics into automobiles.

However, all of these technical innovations didn’t come cheaply, and the 300SL wasn’t initially available in the sporty open body style it eventually became famous for. As a result, despite its magnificence, the 300SL didn’t turn a profit. So, in 1956 Mercedes desperately needed a cheaper sporting model that was easier to manufacture and sell. And voila, the absolutely charming 190SL was born.

The 190SL kept some of the 300’s features, like its independent rear suspension, but forwent the expensive space frame in favor of a shortened sedan platform. The fuel injected six-cylinder was also replaced by a 4-banger with twin Solex carburetors. These changes made the 190 more affordable than the 300, but no less sexy. Both SLs are simply gorgeous, and their unparalleled build quality makes them notoriously difficult to restore, which makes well-maintained examples all the more valuable. On the road, the 190 handles more like a cruiser than a sports car.

However, its styling made it look just as nimble as its older brother. Thanks to its beauty, historical significance and build quality, a Mercedes-Benz 190SL will consistently rank among the most valuable cars in the world, provided it is in good condition. 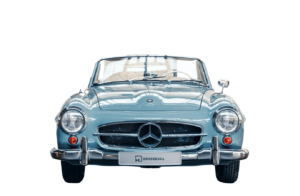 Again, by signing up you are making a non-binding reservation. You will not be charged unless you decide to finalize your investment during the initial offering.
£50 Per share
77% left
Reserve shares